The Ride to Snaefell: My Walk Into the Clouds

A new Isle of Man resident takes us on her journey up into the clouds of Snaefell as she discovers the many wonders of the Isle of Man.

As a new Isle of Man resident, I am intrigued by everything Manx. The heritage, the forests, the cats, the history, and the culture- I just can’t get enough.

When I visited nearly two years ago, one of my favourite trips was the ride to the summit of Snaefell, the Island’s only mountain, on the electric railway.

As a brand new ‘local’, I was incredibly excited to do this again and get a bird’s eye view of my now home.

It wasn’t the sunniest of days- Manannan’s cloak was definitely out in full force.

Did I lose you?

Manannan is the Island’s namesake and a mighty sea god. He is the protector of the Island and hides it behind his ‘cloak of mists’ when danger is afoot- kind of like Harry Potter’s Cloak of Invisibility.

I boarded the train in Laxey. The Manx Electric Railways celebrated their 125th Birthday in 2018 and the history of this rail is seen in their trams. The quaint seating, wood frame and conductor’s area are all well-preserved; updated yet full of the charm of yesteryear. I felt as if I was walking in to a time capsule.

The tram was packed this October day with visitors exploring the countryside and local families out for a nice Sunday afternoon… there were even some four-legged friends on-board! My partner and I found a cosy seat in the middle of the car and proceeded to literally watch the world go by.

The country side passes by in a cacophony of sights and scenes. Sheep, seemingly weightless hop up the mountain. Angles ascend and descend around the tram as the colours of Mann burst in an autumnal assurgency.

We pulled into the only stop before the Summit, the ‘Bungalow’- directly on the TT course. I saw a group of hikers heading to the Summit on foot. As I sat in the comfort and warmth of my seat in the tram, I thought to myself, ‘Maybe next time…’

As we were nearly halfway up to the top of Snaefell, the scenes disappeared into a mist as we began our ascent into the clouds.

With the tram fully enveloped in the mountain’s clouds, we pulled into the Summit and I, along with my fellow trekkers, climbed out of our transport and emerged into another world. It was chilly, it was cloudy and it was perfect.

On a clear day, you can see the 7 Kingdoms from the Summit- for those not well-versed in everything Manx, the 7 Kingdoms are England, Scotland, Wales, Ireland, Heaven, Sea and the Mighty Kingdom of Mann. Today, however, was not a clear day.

In striking dichotomy to the sight of the kingdoms I was treated to a mysterious sense of solitude and peace. Shrouded in Manannan’s cloak (clouds) Snaefell summit seemed alone in the world. Both tiny and formidable at the same time. I walked to the post on the mountain, the tallest point in the Isle of Man and stood amidst the clouds, the mist and the cloak. This is what it must feel like to take a walk around the heavens.

After picture taking, exploring and a cappuccino at the Summit Café, our tram was ready to head back to earth. 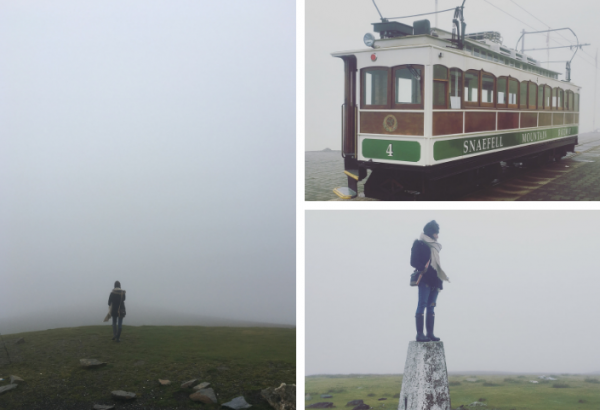 Now donning hats and scarves to battle the chill of the mountain we boarded the tram car. The mist began to lift off the mountain- about 20 minutes too late for a clear view, but perfect timing for our trip.

The sun cascaded into the tram breathing life into its inhabitants and illuminating a hidden world unseen on the way up. A women’s voice is heard over the PA system narrating the points of interest as cameras, phones and the occasional iPad came out to capture the view.

The rogue mountainside gave way to delineated farmlands, signifying the end of our adventure.

We headed into Laxey via the rooftops and chimnies of the sun-drenched Parish. I can’t help but feel like the tram station looks like something out of the American Wild West- but I guess most depots built over a hundred years ago look alike.

It’s amazing to think that this was an ordinary Sunday. I moved to the Island a mere three months ago and already have settled in to the Island life everyone raves about. My life has changed immensely since moving from New York City, and I wouldn’t change it for the world. Nestled in behind Manannan’s cloak is where I call home, my dear Ellan Vannin, my own Isle of Man.

Ready to start your own journey? Contact a member of our team today!